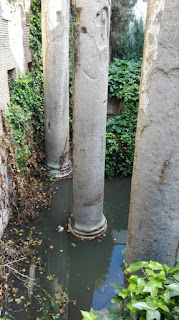 He wandered aimlessly through the streets of the old Sevillian town, immersed in his musings. It was the first hours of a cold January evening and it had been raining all day as usual during the last week. Now it did it with less intensity, but the inclement gusty wind caused the drizzle and the cold to be biting, and the few passers-by who ventured to face such a panorama, either by labour obligation or by matters that required to cross the streets of downtown, imbued their faces behind the raised collars of their coats to mitigate, as far as possible, that unpleasant laceration.
Not John, he simply walked aimlessly. He did not seem to make a dent in the storm because his mind abstracted him from everything around. An exhausted, outdated, overcome by circumstances thought. After the quarantine of springs, he couldn´t understand how he had reached the point of not believing in how the people around, even in an ephemeral way, enjoyed. Love…Why did he refuse again and again to enjoy that feeling? He was not a bad-tempered man. On the contrary, he used to overflow sympathy in his day to day without falling into the caricature of the tired clown. He was a hard worker, a reasonable cultured person, with an education and values that were more than acceptable. Yes, he had his faults like everyone else and he was aware of them, and maybe he was not physically and Adonis, but he was not an ugly guy either and the proof was that it didn´t take too long without some female feeling attraction for him. So, what was wrong? Why did none of these women really bet on him? John wasn´t, as it is said, a “womanizer”, he really wanted to meet someone who truly showed him that she really wanted to know him, someone who felt the need to see him, to be with him. But the reality was that he did not get it, no matter how hard he tried.

After a long time entangled in his reflections, his feet took him to the Air alley. Halfway through it, he passed a massage and Arab baths premises, looked inside and stopped walking. Behind the glass door, the dark face of a woman grabbed his attention. The girl, who at that moment was chatting with a colleague, exhibited a cheerful pearly smile and a beautiful almond shaped eyes that dazzled John´s gesture. But soon he thought that such a girl, with that beauty and at least ten years younger, would never notice someone like him, an outmoded man of reached maturity, or as he used to say, that the second half of his game had already begun.
With that conclusion in his mind, he lifted the collar of his leather jacket and continued walking down the alley. Meanwhile, inside those Arab baths, the girl gave a kind of jump and turned off her smile while looking towards the door.
—What's happening to you? —Asked his colleague to see the unusual reaction.
—Nothing, I've felt a chill —Azucena answered, still looking at the empty entrance to the enclosure that was only usurped by the gusting drizzle.

John, who continued walking until the end of the passage, turned the corner towards Mármoles Street and found those three Roman columns so striking and that always made him to stop and admire them, although most of the time he stopped before them because they brought him a kind of serenity that allowed him to immerse himself in his thoughts. He didn´t know exactly why that happened to him in front of the beautiful white columns, since he was not an architecture expert and, although he liked the history of the city, he was not a passionate either. However, without knowing it, whenever he passed by, he would stare at them in silence while his brain discerned the problems through his convoluted mental corridors. However, without knowing it, whenever he passed by, he stared at them in silence while his brain discerned the problems through his convoluted mental corridors.
The columns could be completely seen in summer even though they were lower than the street level, but in winter they were used to be covered almost half way by the water, plants and flowers due to the rains, and this was precisely the case.
John leaned on the grey grille that separated him from the pit where they were, looking to the water lilies which were floating on water hit by the fine drizzle and between which leaped a small frog. He closed his eyes and started to meditate on his bad luck with the opposite sex, and for a moment the anguish broke the usual strong and cheerful personality that characterised him. He was not the type of man who cry easily, quite the contrary, he was the typical tough guy who try to hide his worst moments by disguising them with a mask of carnivalesque smile or by shutting up the crying in a prison of haughty pride. Nevertheless, at that moment he felt miserable and could not prevent that ball of anguish climbing his throat to his eyes, moistening them with the salty secretion. 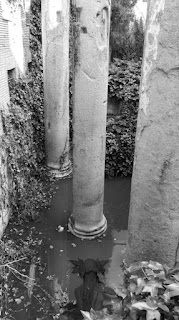 After a few seconds, he swallowed hard trying to calm himself and then he felt as if someone was looking at him. He turned his head to see that there was no one there. But when he looked back at the columns, he froze at what his eyes saw. The frog, which moments before was jumping between the leaves, clung to the hand of a girl who was half submerged in the water and who was staring at him without paying attention to the amphibian. A pale-skinned girl with half-dark brown hair and half green that matched with her big emerald eyes. She looked at him with a calm expression and a shy smile drawn on his lips.
— Who are you? — asked John incredulous.
The girl said nothing, but the leaves and water lilies that floated on the improvised pond started to swirl around her to place in such a way that hey formed a name.
—Astela…—he blabbed— But, how have you done that? It can´t be! — And putting his hands on his face, he concluded— it must be my imagination, I must be going crazy.
—This is real —the voice penetrated John´s mind without passing through his ears— your imagination has nothing to do with it. I´m in town since it was called Hispalis. Do not be scared, I´m going to help you.
Very slowly, John uncovered his face lowering his hands, and looked at her again.
—Why me? I´m nobody, why have you chosen to help me from so many people?
—Because every winter, when these columns inundate, I look at you passing by.
—But I´ve never seen you.
—I choose who and when you can see me.
—And what reason has driven you to show yourself today and want to help me?
—Your heart.
—My heart? Can you see it?
—No, but I can feel it. And for the first time in times you have stopped in this place, I´ve felt a soul that darkened drowned in the uneasiness and bitterness.
John lowered his eyes assuming the truth that Astela had found out and until that moment only he thought he knew.
At that instant, footsteps seemed to approach. Footsteps with the classic sound that the hooves of the horses usually make, but whose rhythm didn´t match with a quadruped like an equine, because they sound like a biped. John looked at Astela and she looked towards the Air alley. She looked at him again and said:
—It is coming.
—How? Who is coming?
—I think Haiiaa has already found a remedy to light up your darkness.
—What? Who is Haiiaa? What remedy?
—Not only there are deities like me in Seville. They are terrestrial and from other eras, as when the Muslims called the city Isbiliya.
John, who was looking at that moment to the corner where those footsteps were heard closer and closer, heard the water nymph say:
—But calm down, she knows what she does.
He turned to look at Astela but there was no trace of her, only waves in the water and the frog coming out of it climbing a creeper.

The sound of the hooves was already at the bend and John held his breath waiting to see another spirit, but what he saw left him perplexed. The dark complexion, the beautiful jet-black hair and the almond-shaped eyes met his gaze. She gave him the snowy smile he saw through the glass of the Arab baths a while before, breaking the silence with a "hello" that made him shudder, and barely managed to return the greeting by initiating a conversation. Meanwhile, a half-woman, half-deer shadow slithered on the way to the Royal Alcazares, observed by eyes from the small pond that bathed the Roman columns. Emerald eyes.