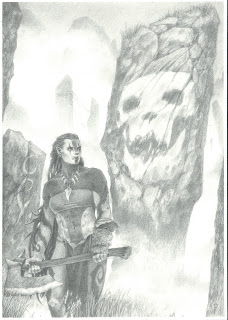 She was small, squalid and physically weak in comparison with all those who were born in her time. It was done what it was usual to do with the newborns that did not present the physical canons that the race of the orcs required, discard it. She was taken to the great crevice between the cliffs, along with other wretched babies, where she was abandoned to certain death. But a couple of days later, one of the old orcs who patrolled the boundaries, heard a strange sound that the meandering wind between the colossal mountain dragged in an echo. Motivated by curiosity, he went down to the area where there were lots of small bodies, some recently dead, others decaying chewed by the rats, and in the vast majority there was only a skeleton left. To his surprise, he found still alive and crying, that insignificant creature. It seemed impossible that it still breathe, but the merit of clinging to the life of the tiny being prompted the old orc to take her back.

The girl survived and grew up under the protection of her rescuer, who called her Igrak. But he died when she was only six years old, so she was handed over to a family of unscrupulous orcs. They treated her with blows, they chained her like a vermin for the sole purpose of doing the most unpleasant tasks, was fed with the bones and leftovers of their own food. But at the age of fourteen, one of the multiple beatings to which she was subjected by the head of the family, this time in public in the middle of one of the town squares, Igrak took advantage of a neglect and bit with all her might the back of his right knee, bringing in tissues, muscles and ligaments. The surprise orc fell down screaming in pain, and before he could go back on his feet, Igrak leaped on him with a large stone gripped with both hands, and began to hit his face with all the strength that conferred the anger and hatred accumulated during years. No one dared stand in the fierce scene. Only when the orc´s face was a bloody and misshapen mess, did a young warrior take the stone away from Igrak and, to everyone´s astonishment, held out her hand to get her up.
That same day the young woman joined the warrior hordes where she was placed in front, right in the place of those who first die in battle, but far from bowing to the inevitable, she was surviving while developing her small body to become a vigorous and bone-crushing warrior thanks to an innate aggressiveness and ability to fight.

Now she has the respect of all her fellows, including Rykur, that warrior who one day snatched the bloody stone that gave her the freedom, and now fought side by side with his female, Igrak herself.